I love being a tourist, whether in my hometown, my adopted home, or actually on holiday. The past several days I spent running around Edinburgh entertaining houseguests, new friends, old friends, and myself. Here are some of the highlights, all of which included a taste of something alcoholic. If that’s not your thing, just look at the pretty pictures and move on. This week will be full of water and vegetables, but, for now, sin:

The Edinburgh Christmas Market:
The locals try to convince you that winter is unbearable in Scotland. I’m still convinced it’s nothing like an NYC or Kentucky winter. And who cares about the cold when you’re riding a Ferris Wheel, sipping mulled mead, eating German noodles, and staring at the most awesome castle in Scotland, while you spin just yards from a massive monument to Sir Walter Scott?

Mulled Mead from the Edinburgh Christmas Market.Note that it comes in an actual mug, which you then return in exchange for your deposit. No waste, and a much cuter experience. 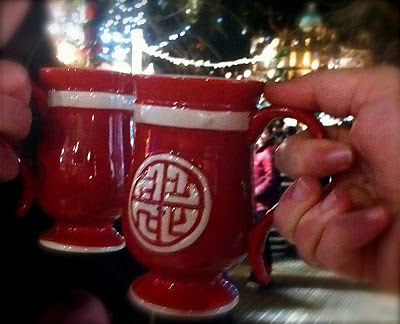 The Underground Vaults History Tour
I am a sucker for a ghost tour, but this time David and I went for the Underground History tour. We’d bought a Groupon and managed to remember to use it (success!). It was a cool tourexploring the Vaults under the South Bridge, where all kinds of mischief and mayhem once occurred. Today it’s used for tours and a witch’s coven. You know, no big deal. This tour also concluded with a [included in your tour price] dram of average whisky and delicious shortbread. 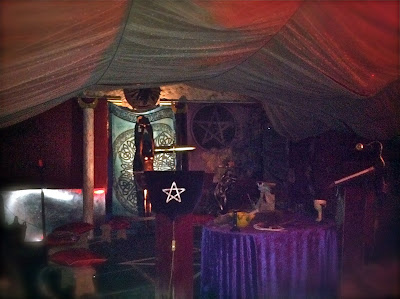 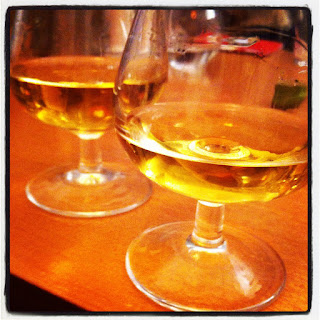 More about this on another blog I’ve been working on (for months now, sorry — will announce soon enough), but it’s just about my favorite Secret Society in the world. It’s not actually secret, in that I can tell you what’s going on and anyone can join. But I like to pretend it’s like the Freemasons. I’m betting some of its members are Freemasons. Anyway, I popped in twice this week — only once for a dram, but it was a deliciously spicy Islay. There was also a delicious chocolate mousse involved. They’ve also got day-passes available if you are only in town for a short while and want to sample some yummy single malts. 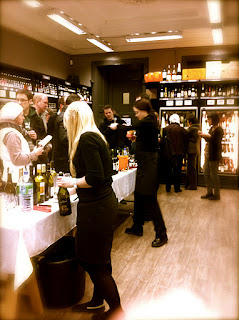 Christmas Wine Tasting at Vino Wines.
There are loads of wine shops in Edinburgh, but this one is both near our house and has yummy tastings. I still feel like an interloper at events like this. Then I realize that David and I are a young couple in our early 30s, thus we don’t look like outsiders at all. The man leading this tasting was super knowledgeable and really easy to talk to. He was also enthusiastic and not-at-all condescending. I loved it. This particular wine-tasting also featured the Devil Herself: the CHEESEMONGER. She fed us Scottish camembert and something that was made out of the same bacteria that is found on sweaty feet. And was delicious.

In between all that adventure, I did manage to work a bit. But that doesn’t make for a fun blog, now does it?