There’s a school of thought that says Americans, by nature, are pushy, competitive, and ADD, because of genetics. The type of people who fled their native countries seeking new lives and adventure would pass down those same explorer/mad-scientist genes to present-day folks. I thought a similar theory might hold true for the Swedes who did not become marauders, and instead remained in their beautiful country. That only seems to be the case for non-concert going people.

The natives we met during our day-trip throughout Stockholm were perfectly charming and helpful. They were tall, beautiful, and willing to give directions or answer questions, always in perfect English, despite the only Swedish I knew was from the Muppet Show. I’ve never had a better concierge (he was local), and this nice woman we stood by on the ferry was over-the-top helpful.

I’m pretty sure that there were pirate descendants at the My Morning Jacket show last Saturday in Stockholm, however. I’ve been to plenty of rock shows, but never have I encountered such a crowded (congrats on the sell-out, guys!) room full of pillagers. The show was pure magic — I should begin there — but I, as you may recall from the MMJ show in Glasgow, I am a wee lass. The crowd there was at least a foot taller than I am, and I have never been pushed and shoved like that (except that time in college when I was involved in some sort of protest and the NYPD got violent).

We were even all the way back by the sound board, and tall men would shove me aside, then procede to stand directly in front of me. David was a good protector, but he was about five seconds from a fight when one rude person shoved me aside, stepped on my feet, then, when I protested, responded, “It’s a concert!” Thankfully, David’s never hit anybody in his life, so I wasn’t actually worried about a brawl. But this giant then stood RIGHT in front of me swinging his arms wildly, elbowing me in the boob, until he was able to shove some other folks out of the way and get closer.
I took this photo holding the camera above my head: 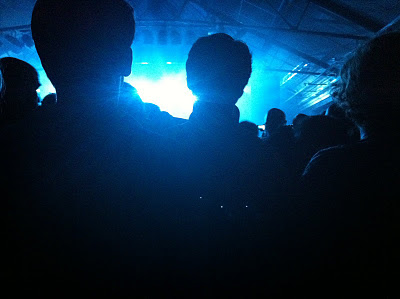 David took this photo holding the camera above his head: 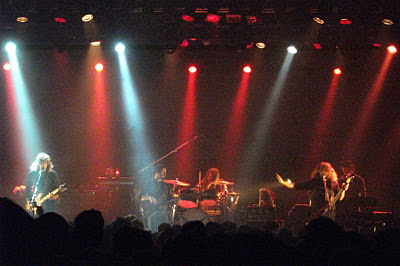 Note that he had to hold the camera above his head to see the band, and he’s not a slight man.

One thing about being short, though, is that you’re used to not being able to see at concerts. I didn’t get to see any MMJ hair flying around, but the sound was amazing (Concert tip: always stand by the soundboard.)

Despite all that, the concert was great fun and My Morning Jacket was brilliant as always. I managed to keep a smile on my face even while being abused because, at the end of the night, I knew I got to go backstage and see them. A hug from hometown friends is better than seeing them on-stage any day.

Really, though, I hope this comes across more as a funny story than as a complaint. It was a lovely evening, but I was reminded of pillaging and marauding of yore. If there’s anything to get rambunctious about, however, I suppose that guy is right. A good rock concert is a good time. 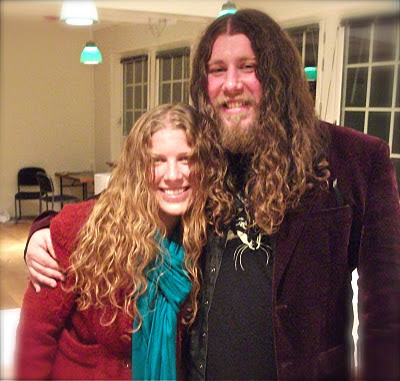