I’ve always been a bit of a history nerd (David would claim that is a massive understatement), but Antiquity was never my favorite. Even the ancient tombs and sculptures at the Metropolitan Museum of Art in New York were just okay. I mean, I thought they were neat and all, but it just didn’t fascinate me the way British history did.

To me it’s always been about the place, not the artifact. Seeing a mummy in the Louisville Science Center is not the same as seeing it in Egypt. And seeing Roman ruins in a New York museum doesn’t even come close to seeing them in Rome.

You know I can’t sit still when I’m in a new place, mostly because of the fear that I’ll never get there again. Since arriving in Rome late Wednesday, we’ve walked at least twenty miles, and have seen unimaginable sights. My mind has been thoroughly blown.

We are budget travelers because we want to save our money for one great meal, rather than six average meals. But you have to pay entrance fees for, say, the Colosseum. Not going is just silly. Skip one meal, and see one sight. It evens out in the end. Also, we walk everywhere. Taxis just eat your money, and I’ve always believed great cities need to be walked in order to be appreciated. You never know what magic you’ll find when you make a wrong turn.

Day One:
Breakfast in hotel room. It’s a budget hotel (<€40/night), but, like most places in Europe, breakfast is included. It’s delivered to the room on a school cafeteria tray, but that still equals Nutella croissants and cappuccinos in bed. We walked to the Colosseum. How crazy is that to think about? It was a crazy sight to see, and nothing could have prepared me for it. To save time, we walked a little further and first visited the Roman Forum/Palatine Hill. There was absolutely NO line there, and it’s a combo-ticket to the Colosseum (€12). This meant we didn’t have to wait in line at all when we finally went to the Colosseum.

We skipped the audio-tour because we’re cheap and because we brought our own guidebook. I’d loaded several history and tour books on my Kindle, so I could pull interesting facts out of midair if any were required. But the Palatine Hill is loaded with unbelievable sights and believable historical markers. We consumed all.

People have lived on that hill since 1000 B.C., and there are excavations galore to demonstrate such history. I’ve never seen anything remotely like the ruins in this area of Ancient Rome, and I feel even more annoyed by cricks and creaks in my one-hundred-year-old home in Kentucky.

After spending an couple of hours wandering through orange groves, fountains, and ruins, we headed across the street to the Colosseum. We were able to walk directly to the security line because we already had our tickets, and we spent the next hour walking in circles and through several dimensions. Tell me again why we imploded Texas Stadium when it was less than forty years old, but the Colosseum survived centuries of neglect? Oh yeah, we lost the recipe for Roman concrete, and we don’t care about building things to last.

Just walk around. From the Colosseum, we walked north up the Via Veneto, continuing to be in awe of architecture, memorials, famous residences, green spaces, and cobblestones. We saw the Changing of the Guard at the massive marble monument to Vittorio Emanuele II. It’s less than 100 years old and ridiculously large. The Romans know how to do a monument. There’s also a free museum inside, which we barely touched. Unfortunately, no one’s allowed to sit on the steps, so don’t think about taking a break there.

We walked on, past Mussolini’s balcony, and found a trattoria serving happy hour specials where we could rest and eat. There we shared a plate of gnocchi (€6) and a 1/2 liter of wine (€6). Sharing is key here, as portions are generally too big for one anyway.

Next, David led me through some winding streets which eventually opened to the Pantheon (free). Yeah, no big deal, just a two thousand year old building in the middle of a bustling piazza. I basically stared at the ceiling with my jaw hanging down for twenty minutes trying to figure out how it hadn’t fallen down. There’s a HOLE in the ceiling, people! And on purpose!

After being awed, we sat down on the steps opposite the Pantheon to draw and write. I got all teary and emotional when a rowdy tourist group that turned out to be an a capella choir literally burst into song on the fountain steps. Could Rome be any more idyllic?

David took my hand and led me few more blocks away to the Trevi fountain, an enormous fountain that appears out of nowhere and, like everything in Rome, blows your mind. I haven’t seen any of those movies that feature it, so I didn’t know what to expect. Legend says that if you sacrifice a coin, you’ll return to Rome again someday. We didn’t toss in any coins, mostly because we only have one coin on us. I didn’t want to throw in a coin unless David threw one in too because who wants to return to Rome without your sweetheart?

Mostly, we wandered around. I still insist it’s the best way to see a city, even if it guarantees you sleep hard. We walked a further 3-4 miles later that night to go eat in a non-touristy area of town. That meal was a splurge, and it deserves a blog of its own. In due time.

My first view of the Colosseum. Just sitting there by the traffic. Insane: 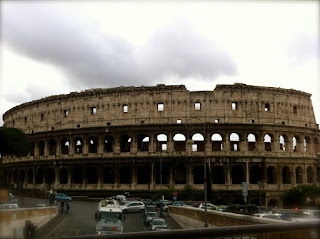 Ruins in the Roman Forum: 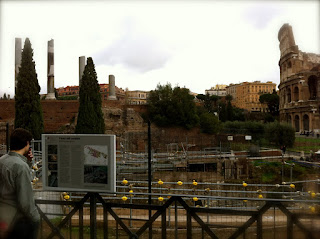 the ceiling at the Pantheon: 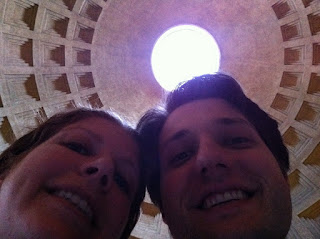 View from the giant monument to Emanuele II: 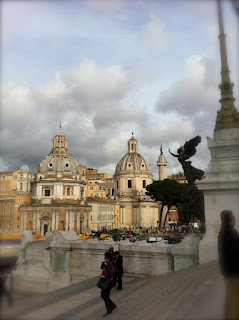 Loads more photos and stories to share. But this blog is long enough.