The second we stepped off the plane and onto the tarmac, David said, “Breathe that. Isn’t that the best air you’ve ever inhaled?” He was absolutely right. It was cool, crisp, and pure. Granted, we were about 100km outside of Stockhom at the Skavsta airport, surrounded by uninhabited land and fir trees, but it turns out that unpolluted air is everywhere in Sweden. I felt my allergies vanish with every breath.

What does one do with 36 hours in Stockholm? We knew we were heading to the My Morning Jacket show the night of David’s birthday, so that left us with only Saturday day to spend exploring. I’d read most of a guidebook on the flight over, as well as Easy Peasy Swedish, which turned out to be not that easy after all. A Kindle is one of my favorite travel tools, at it allows you to carry around several guidebooks and maps in one slim device. Plus you don’t look like a tourist.

As with any good city, Stockholm is best explored on foot. Rather than hit every museum, we opted to wander around and take in the architecture and scenery. I find that a more comfortable way to get the vibe of a city. Plus, you stumble upon charming little Christmas markets that like this one: 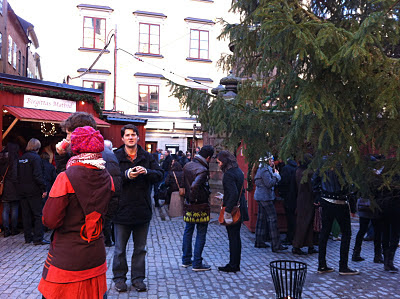 We walked from City Centre across one of many footbridges into the Old Town (Gamla Stan). Stockholm is an archipelago, and much like Paris is centered around the Ile de Cite, the medieval town of Stockholm is on a wee island. We walked through over a bridge and under an archway in the Parliament Building and were immediately greeted by street vendors and hundreds of shops along narrow stone paths. Many of the shops are obviously catering to tourists, but they are in extremely well-preserved buildings that are hundreds of years old, all painted in bright pastels.

After getting Swedish Krona from the ATM (Sweden is in the EU, but not in the Eurozone, much like the UK), I made my first impulse purchase from a street vendor: a small cup of mulled red wine, the perfect breakfast food on a cool autumn day.It was sweet and spicy and it cost 30krona (£3.00 or $5.00). We’d heard Sweden was the most expensive country in the world (though an unscientific google investigation ranks it at the 12th-most), so it wasn’t an extreme shock. Still, it made us realize that 1000 krona we’d budgeted for our holiday wouldn’t go very far if Princess Brigid kept buying sweet treats. 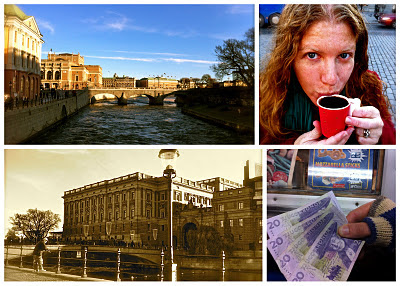 David and I both love food, especially on vacations. It breaks your day into four distinct parts — three meals, plus a snack or tea or beer — and gives you a reason to sit still and soak up the atmosphere. I’d read about Chokladkoppen (which I referred to as “chopped salad” although I think it actually means “chocolate” something) in a book, so we headed there first, walking along the main medieval street. Though there would be the occasional car, the streets in Old Town are mostly pedestrian. They are just too small for regular traffic, and there are too many people darting around to make a car viable.

Once we found Chokladkoppen we realized we could neither 1) understand the Swedish menu and 2) see any prices. Rather than be risky, we opted for a Swedish waffle from a nearby Christmas Market. Mulled wine and waffles seemed like a better birthday breakfast (and much cheaper) than restaurant food. So a duo of charming Swedish women made us one chocolate waffle and one blueberry waffle — both with whipped cream, of course — for 80Krona (£8.00 or $13). At that point we realized we’d spent about $20 on a tiny cup of of wine and two small waffles. Yipes.

We looked up and realized the Market was in the square surrounding the Nobel Museum. Alfred Nobel is known for two things — inventing dynamite and leaving, in his will, instructions for the Nobel Prizes. There was a Marie Curie exhibit (the only woman to win two Nobels) going on, but we were too budget-conscious to go inside. Besides, there was another museum we were more keen to see, and that one required taking a ferry to another island. 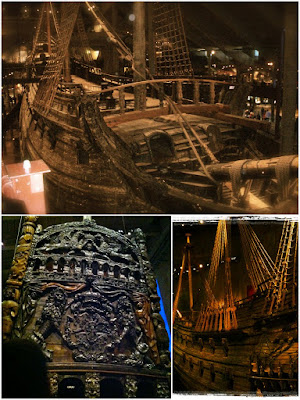 After walking through a few adorable side streets, we found the dock just in time to catch the ferry over to the Vasa Museum. The guidebooks say to save this for a few days into your time in Stockholm, but I’d recommend it as a Day One must-see. It’s the best-preserved ship of its time, and it was completely underwater from the time it sank in 1628 to its recovery in 1961. It’s almost completely intact (95% original) with intricate wood carvings all over it and looks like something out of Pirates of the Caribbean. It’s also so big, they had to build the museum in an old shipyard around the Vasa, draining the water after the fourth wall was completed. The museum also houses skeletons, clothes, and other artifacts found with the ship — a ship that sunk only twenty minutes after its first journey. 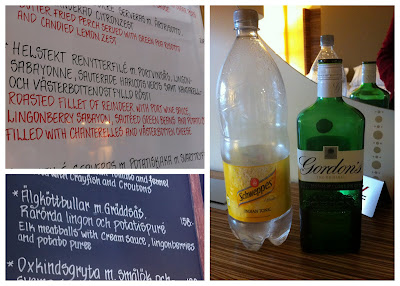 From there we wandered around the streets, heading back to our hotel on foot. We stopped to read menus, laugh at things like “fillet of reindeer” and “elk meatballs,” and catch our breaths at the prices — $10 Carlsbergs and $20 glasses of below-average wine.

We headed back to the hotel for cocktails because those prices were a little out of our range. Thanks to guidebooks and the warnings of friends, we’d thought to buy a bottle of gin at the duty-free shop. We picked up a $5.00 litre of tonic and mixed our own afternoon cocktails before heading back out for dinner.

Because we are vegetarians, and not quite up for elk or reindeer, we opted for Italian for dinner. For half a second I felt guilty, but then remembered that the restaurant was owned by real Italians. Also, it’s is my favorite food, and I rarely get to eat proper Italian meals. We ate in the Old Town at a restaurant called Cafe Michaelango. We had an appetizer of various bruschettas, followed by a risotti and a tortellini dish that we shared, skipping dessert because we were full and skipping drinks because we were broke. Two mains and an appetizer came in at 530krona (£50 pounds or $77), but were absolutely delicious. 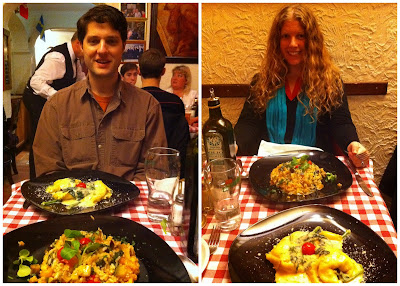 We spent the rest of the evening at the My Morning Jacket concert at the Munchen Brewery — but more on that in another blog. For now, enjoy a photo of small, medium, and large anchors at the Vasa Museum. 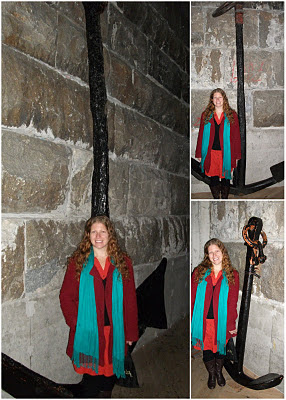