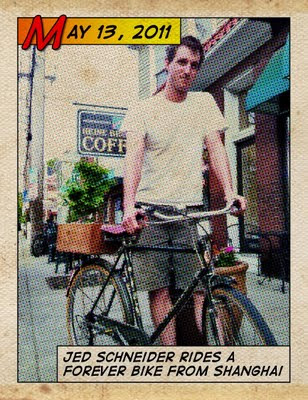 One night recently as I was walking my dog on Frankfort Ave., my head was turned by a green bicycle. It was a brand I’d never seen – a Forever, from Shanghai, China. I turned to a trio of guys seated at a nearby sidewalk table in front of Fat Jimmy’s to ask which one of them owned it.

Jed Schneider proudly claimed ownership of the bike and stepped away from his pals at the table to tell me about it. Just then his waiter served up his pizza, so I promised just to take a minute. Jed told me he found the Forever in the back of the old Highland Cyclery. He originally bought it for his wife. “I use it all around Crescent Hill,” he said.

Jed volunteered that the wooden box bolted to the rear rack wasn’t original equipment. (I could tell.) It was his way of making the rig more useful for running errands. And a great addition, I must say.

Jed and his Forever bike reminded me that most of the world gets around each day not by car, but by bicycle, walking and on city transit. In Shanghai, Forever Bicycle Co. has the capacity today to crank out more than 4 million bikes a year. They claim to be the top maker in China and Forever builds some 300,000 electric bicycles, too, according to the company’s Shanghai Website, www.forever-bicycle.com.

It’s no surprise that China now turns out more than four fifths of the 130 million bikes produced worldwide each year. And production levels are on the rise. You may not feel like such an oddball pedaling your bike at rush hour after you consider the following:

For starters, we cyclists are clearly in the majority. Bicycle production is more than double automobile production worldwide! The bicycle is still an essential form of transportation in the world.

More people get to work by bike and walking than by car, especially in China – even though the Chinese have recently seen a rapid decrease in bike ownership as its population becomes wealthier and turns to cars.

I’ve seen reports that in the most cycled Chinese cities, such as Tianjin, Xi’an, and Shijiazhuang, the bicycle still accounts for more than half of all trips.

In the west, the Netherlands, Denmark, and Germany have the highest rates of cycling, ranging from 10 to 27 percent of all trips. This compares with about one percent of trips in the United Kingdom, the United States, and Australia. (Louisville, KY isn’t even hitting one percent yet.)

In Africa, where bicycles are often unaffordable and where walking is generally the domin­ant transportation mode, cycling’s share of trips registers in the single digits except in a few medium-size cities such as Morogoro, Tanzania; Eldoret, Kenya; and Ougadougou, Burkina Faso, where 10-23 percent of trips are made by bike.

Don’t make the mistake of thinking bikes are just for the poor who can’t afford cars. The Netherlands prove that brains, wealth and good health go right along with bike culture – and haute couture. Damn, those Danes are stylin’! Just take a look at Cycle Chic, a Website with a bold tagline: “Hold my bicycle while I kiss your girlfriend … The Original. Bringing Sexy Back Since 2006.”

The most bike-friendly cities didn’t get there overnight. Decades ago their people demanded better transit choices. And once they saw the overwhelming benefits of bike infrastructure, they continued to invest in more of the same.

In Copenhagen, Denmark, where 36 percent of commuters biked to work by 2006, the city has plans to invest $200 million between now and 2024.

In Freiburg, Germany, 70 percent of local trips are made by bike or public transit or on foot thanks to regular, annual investments in bicycling infrastructure dating back to 1976.

In Australia, the state of Victoria, which is home to Melbourne, the country’s second largest city, amended planning laws to require all new large buildings to provide bike parking and other facilities such as lockers and showers.

New York City and Chicago have proved that even northern-tier American cities can become walkable and bike-friendly when they make the investment. In Washington, D.C. you can ride your bike straight down the middle of Pennsylvania Avenue on a bike boulevard!

Louisville always seems to be like some middle child, looking for ways to stand out and compete, but lacking the resources. If we’re smart, we’ll ramp up spending to make ours the most walkable and bike-friendly city in mid-America. Then stand back and watch us grow.

PS: Remember, every lane is a bike lane.
Share the road.

You may wonder: Why does the green space on LouisvilleKY.com focus so much on cycling and walking and not much else? Good question. The answer is pretty simple. Nothing else you and I can do will make as much difference as will our transportation choices. Until we cut back on our dependence on cars our nation will continue to lag behind in terms of health, wealth and community. Why can’t the most prosperous nation on earth lead the way in smart transportation choices? Join People for Bikes today. Maybe we can.